We found a spotlessly clean taquería perched on a platform of concrete raised up perhaps three feet above the pedestrian mall with thatched umbrellas shading a collection of very tall, very tiny round tables. Fernando showed me how to eat the tiny folds of tortillas stuffed with sessos, cabeza, and al pastor (brains, cow cheeks and marinated pork) slathered in picante salsa and introduced me to Mexico’s popular icy, sweet tamarind drinks. He regaled me with the story of his three years in Germany with a German girlfriend he met in Cancún while he was working at a resort. She spoke a smattering of Spanish, but he knew no German.

“Entiendo tu frustración,” I said in tentative Spanish. I felt the same way—frustrated. Here I was with a young god, and all I could do was gaze at him and hope that he didn’t think I was too stupid. Gazing wasn’t that bad, actually.

I ate my tacos al pastor, which is pork sliced very thin and layered over a giant skewer that revolves in a heating element and cooks continuously until the skewer is empty. The meat is reddish in color and has a vaguely honey-baked ham flavor. The best al pastor, I came to find, was cooked on busy city streets and dusted with exhaust carbon and automotive lead by every passing bus and car, but Taquería La Concha in Puerto Escondido turned out a pretty good al pastor, too. We drank our tamarindos and gazed in each others’ eyes. I ordered a Tres Equis and as I sipped it, he said he didn’t drink, wooing me with his clean living.

Meanwhile, Gerardo had lumbered past us, drunker than before, slurring epithets under his breath and swearing at the people he ran into. On his third pass, he happened to look up and see Fernando. He staggered up the steps, poured himself into the empty chair and began an obnoxious diatribe against Americans in Spanglish. We paid our bill and hurried out into the evening, leaving Gerardo behind, muttering indignantly.

It was too early to go to the club, but we searched out the stairs that led to it and the village beyond. From the stairs, we saw that Puerto Escondido wrapped around a shimmering, open-ended bay, that stretched south from the point where the lighthouse stands, around to a natural outcropping of rock that juts up through the sand into the water. Most of the town is built on the mountain, but the tourist section is drawn along the littoral, right in the sand. The main street was converted to a walking mall with a few hotels, restaurants, and many shops.

Fernando and I stood side-by-side on a bougainvillea covered wall and watched the sunset. Lightning arced between us. 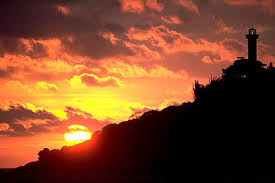